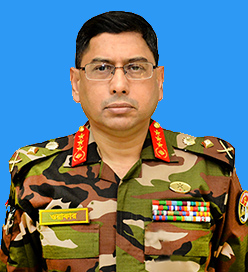 Lieutenant General Waker-Uz-Zaman, SGP, psc assumed the duties of Principal Staff Officer of Armed Forces Division (a ministry level Joint Forces Headquarters under Prime Minister’s Office) on 30 November 2020. An alumnus of Bangladesh Military Academy, the General was commissioned in the Corps of Infantry on December 1985. Having an illustrious and colourful career of more than three and half decades, Lieutenant General Waker brings with him an enormous amount of experience of holding key command, staff and instructional appointments.

In his distinguished military career, Lieutenant General Waker Commanded an Infantry Battalion, an Independent Infantry Brigade and an Infantry Division. His key staff appointments include staff officer at an Infantry Brigade, School of Infantry and Tactics and Army Headquarters. He was a distinguished instructor at ‘School of Infantry and Tactics’, ‘Non-commissioned Officers’ Academy’ and Bangladesh Institute of Peace Support Operations Training’. Prior to joining as Principal Staff Officer of Armed Forces Division, Lieutenant General Waker was working as Military Secretary in Army Headquarters.

As the head of the Armed Forces Division, he is directly involved with the UN Peacekeeping Affairs of Bangladesh Armed Forces. He is also nominated as a Gender Champion and Gender Advocate of Bangladesh for UN Peacekeeping Affairs. By virtue of his appointment as Principal Staff Officer, he also heads the ‘Bangladesh National Authority for Chemical Weapons Convention’ as Chairman. Under the Blue Helmet, Lieutenant General Waker completed two tours of duty as observer and staff in UNAVEM (Angola) and UNMIL (Liberia) respectively.

Lieutenant General Waker had the rare privilege of commanding the National Victory Day Parade for three consecutive times. He was awarded the coveted ‘Army Medal of Glory (SGP)’ for his notable contributions in the modernization of the army. He frequents as a keynote speaker in different seminars and symposiums at home and abroad. He enjoys games and sports.

He is happily married to Begum Sarahnaz Kamalika Zaman and blessed with two daughters.